NY Times: Bus Ride to Live in Shadows No More 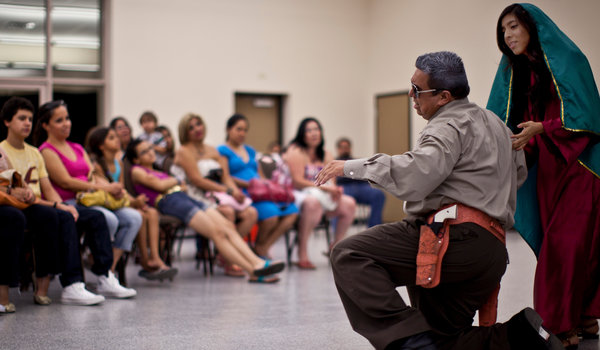 PHOENIX — The route they will take on their cross-country trek resembles a slithering snake — up, down and around in a series of intentional detours that are equal parts political strategy and provocation. Their bus leaves from this sprawling city in the desert at sunrise on Monday, carrying 30 men and women who say they have chosen to live in the shadows no more.

If all goes as planned, they will get to Charlotte, N.C., on Sept. 3, just as the Democratic National Convention is getting started. For the [undocumented] immigrants taking the ride, it is time to make front and center a problem they feel President Obama has failed to confront.

They do blame Congress and the Republicans for stonewalling attempts at immigration reform, but as one of the riders put it, “they’re not the only ones at fault.”

“No papers, no fear” is their motto, and the words are stamped on T-shirts and posters that went on sale at a party here on Wednesday to raise money for food and water, lodging and toiletries, gas and rent of the bus, and also a bail fund. It is not as if anyone is looking to get arrested, but they are preparing for it.

The bus will traverse unfriendly territory for immigrants who are in the country [without status] — states like Georgia and Alabama, where the police are allowed to check the immigration status of certain people they detain.

It will cut across Louisiana and Mississippi, both of which tried — and failed — to enact legislation imposing penalties against [undocumented] immigrants. It will slice through Tennessee, where in Davidson County, the sheriff boasts about his role helping federal authorities deport them.

They hope to expand on the activist role carved out by immigrants who were brought to the country as children, many of whom would be shielded from deportation under a policy enacted last month by the Obama administration. (Many of the riders on the bus are the parents of young people whose protests eventually spurred the administration’s action.)

“I’m running this risk because I want us to be respected, I want us to be recognized as the human beings that we are,” Maria Cruz Ramirez said at the party, where she sat before a makeshift stage, surrounded by other bus riders.

Ms. Ramirez, 46, said she came here 11 years ago from the Mexican state of Hidalgo to give her three children, whom she had brought along, a chance at a better life.

Gerardo Torres, 41, said he arrived here 18 years ago from the Mexican state of Aguascalientes so he could live freely as a gay man.

David Ramirez, 22, is among the youngest of the riders — a green-eyed Mexican from the state of Durango who said he was brought to the United States when he was 9, too young to have made his own choice.

“I have a bachelor’s degree in economics, for whatever it’s worth,” said Mr. Ramirez, who graduated in the spring from Dominican University, just outside Chicago, where he lives.

For them, the bus offers a chance for empowerment and kinship. The ride to North Carolina is scheduled to last six weeks, and Ms. Ramirez, who said she had never spent time away from her children, has forged a close friendship with Mr. Ramirez, who is almost as old as the oldest of her sons and is traveling on his own.

She said she had set aside the documents her family would need to run their lives and the household in case she does not make it back: Mexican birth certificates, bank account information, phone numbers of friends who can help them.

Mr. Torres said joining the ride forced him to come out to cousins, aunts and uncles who had no idea he is gay. “I want to be the voice of the queer community,” and the only way to do that is to embrace his homosexuality publicly, he said.

Mr. Ramirez said he had made no special plans.

As the party wrapped up, guests began to collect the chairs as actors from the New Carpa Theater dismantled the makeshift stage, set up in the auditorium of a labor union hall on 24th Street.

It had been a night of performances, like the short play featuring an encounter between Our Lady of Guadalupe, the patron saint of Mexico, and Sheriff Joe Arpaio of Maricopa County, known for his crackdowns on [undocumented] immigrants. In it, Mr. Arpaio asked Guadalupe for her papers, while Guadalupe asked him to repent. He refused, and she left him to find his way out of the desert along the border, a place many Mexicans have died trying to cross.

“This Land Is Your Land” played softly in the background.